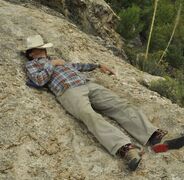 Biography: Born in Virginia Beach, VA.   Undergrad (2003): B.S. in Geology and minor in Architecture/Art History at the College of William and Mary, advised by Dr. Chuck Bailey.  M.S. (2008) at the University of Texas at El Paso working on the tectonics of the St. Elias orogen in Alaska, advised by Dr. Terry Pavlis.  Worked in the oil and gas industry (Oklahoma City) for 5 years, mostly on the Marathon fold thrust belt in W. Texas.  Ph.D. (2018) at the University of Arizona working on tectonics of the Pamir Mountains (western Tibetan Plateau) in Tajikistan among other topics, advised by Dr. Pete DeCelles.  One sister, Anna, an entomologist who works and lives in the Chapel Hill region of N.C.  My better half, Karla, is a physician assistant and we have one son, Santiago, born in 2010. 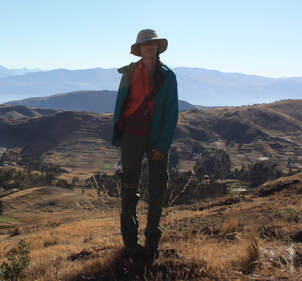 Dr. Lily J. Jackson (Postdoctoral Researcher)
Personal Website
​Google Scholar Profile
Biography: I am a native Arizonian from Prescott, AZ. I proudly hold both a GED and a Ph.D.. I earned my Bachelors of Science degree (2014) at the University of Arizona in Geosciences. At the U of A, I engaged in diverse research projects including in paleolimnology and tectonic geodesy, which helped shape my current research identity as a tectonic sedimentologist. I earned a Ph.D. in Geological Sciences from the University of Texas at Austin in 2019, with a focus on sediment provenance and paleoaltimetry. I spent about 1.5 years working for an international energy company, where I planned and drilled over 20 unconventional oil and gas wells in south Texas and assisted an exploration project in Louisiana, before returning to academia.

Research:   My current research is focused on elucidating the Cretaceous to recent magmatic and sedimentological record of Ecuador. My extended research interests include: The Cretaceous-Paleogene boundary in northern South America; linking tectonics and biodiversity in the Americas; Stable isotope paleoaltimetry and paleoclimate reconstructions; and depositional environment and landscape evolution in the Americas. 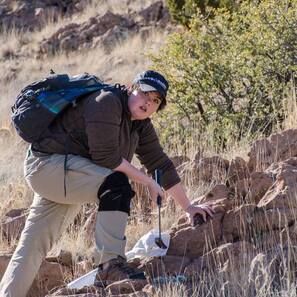 Jessie E. Shields (PhD, anticipated 2024)
​​​Personal Website​
Biography: I grew up in the Twin Cities, Minnesota where I earned my B.A. (2015) in Geology at Macalester College. While at Macalester, I studied the tectonic evolution of the Colorado Plateau Transition Zone and element mobility during subduction using metamorphic rocks from Sivrihisar, Turkey.  I then obtained a M.S. (2019) from California State University, Fresno while working with Dr. John Wakabayashi. For my Masters research, I used metamorphic petrology and geochemistry to better constrain the processes that form mélanges in the Franciscan Subduction Complex of California..

Research:   I study the tectonics and geochemistry of continental margins, focusing on the North American Cordillera. Ongoing research includes 1) understanding the mechanisms that drive crustal melting in the N.A. Cordillera and its significance for regional tectonics, 2) reconstructing the tectonics of the central Sierra Nevada and Walker Lane and 3) constraining the processes that drive the large scale movement of material within subduction zones. I use a wide variety of tools to address these problems including thermodynamic modeling, geochronology, geothermobarometry, and other microanalytical techniques (e.g. EMPA, EBSD, LA-ICPMS).

Adam Trzinksi (PhD, anticipated 2023)
​​Personal Website
"Lunch and Geology" Instagram
Biography: I stumbled into Illinois State University like a lost dog. I had no declared major, never had an interest in science or school, and was funneled into the only general education science course with open seats left: Geology 101. Thanks to a passionate and engaging geology faculty, I was immediately captivated – and several years later, I still am. The journey thus far has taken me through two degrees and a diverse career with multiple internships and research experiences along the way. I participated in four different research projects while pursuing my bachelor’s degree, which included geophysical surveys, petrographic sequencing, groundwater flow modelling, and geologic mapping. During my master’s degree at the University of Delaware, I completed annual fieldwork in the remote Argentine Andes studying the occurrence of high-elevation, ice-saturated landforms and completed a GIS certification program on the side. I held two separate internships gamma logging wells and 3-D modelling through the Illinois State Geological Survey (ISGS), and spent two terms interning with three total years of employment for an environmental consulting firm.​  After tasting the many flavors of geology in a variety of settings, I arrived full circle to the initial interest that brought me to geology: understanding the mountains.  In my free time I enjoy checking out local food and brews, writing music, and exercising.

Research:   I am researching the tectonic history of southern Arizona.  Specifically, I am using methods such as geologic mapping, stratigraphic analysis, cross section construction, geochronology, and Raman spectroscopy of carbonaceous material (RSCM) to answer two questions:  1) Did an orogenic plateau with thick crust exist in southern Arizona during the Late Cretaceous to early Cenozoic, and 2) is there regional evidence for deformation that could have thickened the crust to form such a plateau? 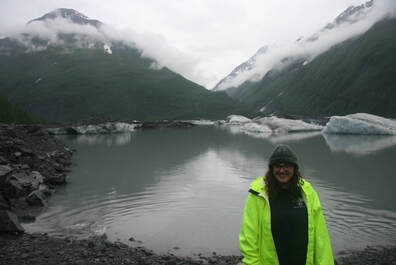 Mollie Pope (MS, anticipated 2023)
​Biography: I grew up in southeastern Kentucky and earned my BS in Geology with a minor in nanotechnology from Union College in Schenectady, NY. While at Union, I studied the relationship between the Chugach and Prince William terranes in southern Alaska through U-Pb and Hf isotope analysis of detrital zircons. After my time at Union, I began a Fulbright Research Grant at the University of Cape Town, where I investigated the formation of the Saldanha quartz porphyry in the Western Cape of South Africa. Prior to my start at UWyo, I worked at Yellowstone National Park as a Guest Geologist through the Scientist-in-the-Parks program..

Research: My research broadly lies in understanding igneous and tectonic processes through the geochronology and geochemistry of accessory mineral phases in igneous rocks. 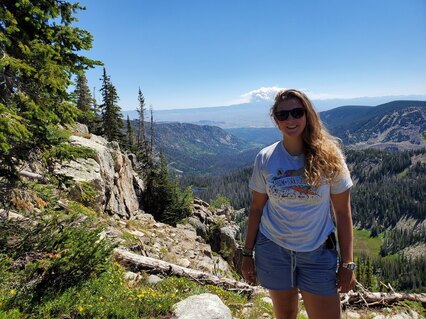 Amanda Rossi (MS, anticipated 2022)
​Biography: I grew up in southern Connecticut and earned a B.S. in Environmental Geology with a minor in Chemistry at the University of Vermont in 2018. In Burlington,  I worked as a geochemistry research assistant and as a mapping intern for the Vermont Geological Survey. Before beginning at UW, I worked as a field scientist for an environmental consulting firm for two years focused on environmental remediation. When I’m not working and studying, I like to hike, bike, swim, ski, snowshoe, camp, and cook.

Research: I am interested in structural geology and tectonics, especially highly deformed rocks in shear zones and microstructures.  My thesis focuses on constraining the timing and kinematics of the Quitobaquito thrust fault/shear zone in Organ Pipe Cactus National Monument (southwest Arizona) and determining whether it may be part of the Sevier thrust belt. 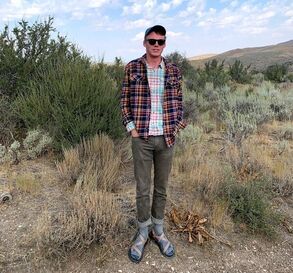 Shane Scoggin (MS, anticipated 2022)
​​Personal Website
Biography: I grew up in northern Virginia then made my way to the University of Arizona where I earned a BS in Geology with a minor in chemistry.  During my time in Tucson I was able to work as a research assistant to a handful of graduate students involved in geo- and thermochronology, structural geology and tectonics, as well as a researcher on Fe- and Mn-oxide helium thermochronology at the Arizona Noble Gas Laboratory.  In my free time I enjoy spending time with my dog; hiking, backpacking, camping, cross country skiing and mountain biking.

Research: I am interested in a range of subjects including non-traditional stable and radiogenic isotope geochemistry, igneous petrology and tectonics.  Ongoing research includes how magma differentiation and evolution in the Tuolumne Batholith may drive fractionation of stable isotopes of titanium on the bulk rock and mineral scale (specifically in titanite).  When combined with whole rock major/trace geochemistry and mineral (titanite) compositions, the δ49Ti signatures of titanites and correlative whole rock samples may elucidate the fractionation processes between magmas and mineral phases, as well as the characteristics of how titanium isotopes behave in magmatic settings.  Additionally I study an early Cenozoic magmatic event in the Pinaleño Mountains of Southeast Arizona which may be representative of similar periods of magmatism that pre-date extension and exhumation in metamorphic core complexes throughout the North American Cordillera.  Through U-Pb zircon geochronology, whole rock major and trace chemistry, petrographic analysis and field relationships I hope to provide a means to understand the timing and formation of these magmatic bodies.  I hope to relate the geochronolic, petrologic, chemical and field relationships to a petrogenetic process that may better explain the formation and emplacement of these types of rocks in metamorphic core complexes throughout the cordillera.
​
Past projects include (U-Th)/He and 4He/3He thermochronology of fracture and vein fill and fault zone Fe- and Mn-oxides in southeast Arizona.  By contextualizing the (U-Th)/He ages yielded in terms of mineral chemistry, zonation, He diffusivity, crystal size and shape we can show how thermochronologic ages of secondary minerals and poly-crystalline aggregates can be interpreted and understood in a variety of settings.  We can then attribute thermochronologic data of secondary oxides to known tectonic and magmatic events (e.g., core complex exhumation, syn-extensional magmatism, and Basin and Range extension).​ 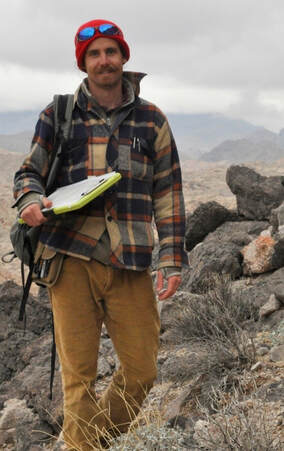 Cody Pridmore (MS, anticipated 2021)
​Biography: My geologist aunt sent me small boxes of minerals as Christmas presents when I was a kid. I grew up in the suburbs of Orange County eight miles from the ocean, quiet and flat. The minerals did not impress me so I ended up with a BA in English and a desire to flee the flatlands. I volunteered often with a non-profit trail-maintenance crew out of Fresno, CA. We worked week-long trips in the wilderness regions of the Sierra Nevada. I then went to France to teach English and ended up working in the Pyrenees mountains for a short while for room and board. I loved the mountains and decided to hike along them to the coast. When I returned to California my flight took me back over the western states on a clear day. I saw the Rocky and Uinta mountains, and the Basin and Range. It occurred to me that this was geology: the planet itself, and the places I especially enjoyed exploring. I worked as a high school English teacher for three years cooped within the gridded empire of the LA Basin. After a year of teaching I took night courses at the local community college: Intro to Physics and Intro to Geology. It took another year before I could get the math and chemistry courses I needed, and within one year I took them all and transferred to the University of Wyoming for a second bachelor’s degree in geology. I completed my remaining work in three semesters and entered the graduate program at UWyo the following semester. When not working on research my wife and I enjoy hiking, snowshoeing, and cooking and consuming good food.

Research: I use  zircon geochronology, whole rock geochemistry, isotope geochemistry, and thin section petrography to analyze peraluminous and leucocratic rocks from the Coyote mountains metamorphic core complex in southern Arizona. We aim to uncover what caused these rocks to form, and how they relate to other peraluminous and leucocratic rocks which form a belt along the western Cordillera from Canada down to Mexico. Hopefully, we will contribute some more lines to history book of North American geology, and perhaps contribute to the understanding of crustal melts and related processes.