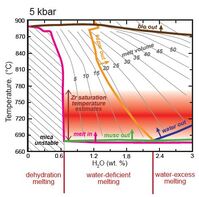 Crustal Anatexis in the North American Cordillera
There is a belt of silicic, peraluminous granites, roughly Laramide in age (80-40 Ma), that outcrops within the interior of the North American Cordillera and is distinct from the Mesozoic Cordilleran Batholiths (e.g., Sierra Nevada).  The belt, often referred to as  the belt of "two-mica granites" or "muscovite-bearing granites,"  is ~3,000 km long and stretches from British Columbia to Sonora.  Although the igneous rocks are widely interpreted to be related to crustal melting, the exact mechanisms  - and hence the tectonic implications for this melting  - are hotly debated.  These rocks are commonly associated with metamorphic core complexes and in some locations the age of extension and magmatism overlap, supporting decompression melting.  In other areas, this relationship falls apart.  In many places, these rocks also occur in areas where the crust was significantly thickened during the Sevier-Laramide Orogeny and some researchers hypothesize that crustal thickening and radiogenic heating resulted in melting. 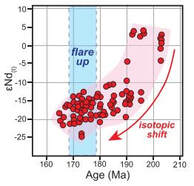 High Flux Events and the Role of the Mantle Lithosphere in Continental Arcs
Continental arcs experience periodic flare-ups, or high flux events, that are characterized by rapid emplacement of intermediate igneous rock and in some cases, generation of new continental crust.  The mechanisms responsible for these high flux events are still unresolved.  High-flux events in Mesozoic Sierra Nevada Batholith and Gangdese Batholith are associated with broadening and inboard migration of the arc as well as temporal shifts to more evolved isotopic compositions of magmatism (isotopic "pull-downs").  Arc migration and pull-downs may indicate a shift from asthenospheric to lithospheric mantle source regions.  Melt fertility of the mantle source region may be critical to resolving flare-up events.

Geochemistry of Accessory Minerals
There are several ongoing projects looking at the geochemistry of accessory minerals, many of which can also be dated by U-Pb methods and thus may lend themselves to detrital applications.  Active projects are exploring zircon, apatite, monazite, and tourmaline.  These projects are generally focused on trace elements (e.g., Sr/Y in apatite as proxy for crustal thickness; Al in zircon as a proxy for ASI in the parent rock ), radiogenic isotopes (e.g., Lu-Hf in zircon), and volatiles (e.g., OH in apatite as a hygrometer).   A subsidiary goal of all projects is to develop LA-ICP-MS analytical capabilities to efficiently (i.e., cheap and fast!) analyze these geochemical and isotopic compositions. 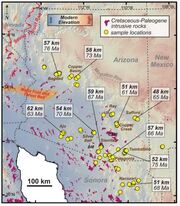 Tracking Changes in Crustal Thickness with Geochemical Proxies
Sr/Y is infamous for its use in distinguishing adakites, however, Sr/Y values in the vast majority of arc magmatic rocks are related to crystallization pressure and hence crustal thickness.   At low pressures (<~12 kbar), Sr is strongly partitioned in plagioclase, but Sr readily goes into the melt at higher pressures.  Conversely, Y is incompatible at low pressures, but partitions into amphibole and garnet at higher pressures.  Global compilations of Sr/Y from Quaternary arc magmatic rocks indicate a continuous, linear relationship with geophysically determined Moho depth. Similar relationships have been developed for La/Yb.  This relationship can be used to explore how crustal thickness has varied throughout time in a single orogen.  These techniques are being applied to orogenic systems globally now and work in ongoing to apply these types of relationships to collisional orogens (e.g., Himalaya-Tibet) and to geochemically distinct igneous suites (e.g., high-K rocks).

Mineralogical Studies of Non-Traditional Stable Isotopes
Investigations into novel non-traditional isotope systems has exploded in the last decade, but most of these studies focus on whole rocks.  I believe that examining non-traditional isotopes in individual minerals is the next frontier.  Our research group is currently studying Ti isotopes in titanite, which provides information on magmatic differentiation and oxidation state of the melt the titanite crystallized from.  ​Some of the igneous suites we are examining in detail include the Tuolumne Intrusive Suite in the Sierra Nevada, CA and the Red Bluff Granite in the Franklin Mtns., TX.  This work involves the characterization of new standards and development of new laboratory methods.  We are initially focused on solution MC-ICPMS analyses, but are working toward laser ablation analyses. 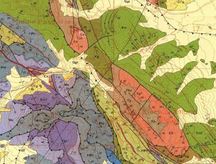 The Sevier-Laramide Thrust Belt in the southern U.S. Cordillera
The connection between the Sevier thrust belt in the central U.S. Cordillera (Utah-Wyoming) and the Mexican Cordilleran system, including the Mexican fold and thrust belt, remains unclear.  Most models suggest that the Sevier thrust belt peters out in southeastern California and does not extend into Arizona.  Laramide-age contractional deformation in Arizona is generally considered to be dominated by high-angle, basement involved reverse faults, similar to the structures that produced uplifts, monoclines, and "swells" on the Colorado Plateau.  These reverse faults in southern Arizona may have reactivated normal fault systems associated with Jurassic to Early Cretaceous rift systems (e.g., Bisbee Rift system).   Another possibility is that there are unrecognized, low-angle thrust sheets running through southern Arizona.   Geologic mapping projects are planned or underway in southern Arizona to document shortening and construct a regional cross-section.  This project is a critical step towards understanding the evolution of the U.S. Cordillera and how orogenic plateaus are constructed.  High paleo-elevations have been proposed for the southern Cordillera (i.e., the Arizonaplano), but the amount of shortening recorded on high-angle Laramide reverse faults is insufficient to generate enough crustal thickening to isostatically compensate high elevation.

Emplacement Mechanisms of Subducted Sediments
​      The Orocopia Schist (and related schists) are trench, accretionary complex, and forearc sediments that were subducted during the Laramide Orogeny and presumably underplated to the base of the crust.  These rocks were exhumed to the surface during the Late Cenozoic and outcrop in western Arizona and southeastern California.     One of the fascinating things about the Orocopia Schist is that in many places where it outcrops, there is data to suggest that ancient mantle lithosphere is still present.  This raises the question:  How the Orocopia Schist ended up emplaced in the lower to middle crust if the mantle lithosphere was in the way?  One possibility is that the Orocopia Schist rose diapirically through the mantle and was relaminated to the crust.  The research group is also interested in looking at the isotopic composition of Oligo-Miocene magmatism in the southern U.S. Cordillera to help identify the presence of Orocopia Schist in the subsurface. 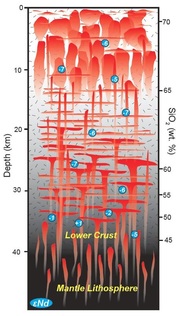 The Isotopic Record of Cordilleran Magmatism
Spatial and temporal isotopic records of magmatism in Cordilleran orogens (continental arcs) are one of the main tools used to understand orogenic cyclicity and the evolution of the continental lithosphere.  These datasets provide a way to examine the deep lithosphere (the lower crust and mantle lithosphere), which is among the most difficult parts of the lithosphere to examine.  Isotopic data from many Cordilleran orogens, including the Central Andes, the U.S. Cordillera, and Tibet (the most well-studied examples of modern and ancient Cordilleran systems) show a spatial isotopic trend in which magmatism is the most juvenile near the trench and becomes increasingly evolved landward.  This trend persists throughout the life of a continental subduction margin and encompasses a broad spectrum of geochemical compositions that represent diverse petrogenetic and geodynamic processes. The isotopic trend is proposed to be ultimately related to a mantle source with juvenile asthenospheric mantle and evolved continental lithospheric mantle comprising the two end-members of the trend.  Mantle lithosphere thins towards the trench in because sub-lithospheric processes, like delamination and subduction ablation, operate to thin or remove the continental mantle lithosphere.  With time, magmatic additions may impart the isotopic composition of the mantle source on the lower crust.  The results of this analysis have significant implications for interpreting temporal and spatial shifts in isotopic composition within Cordilleran orogens and suggest that the continental mantle lithosphere may be a significant source of magmatism in orogenic interiors. 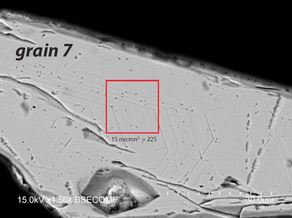 Combined Detrital U-Pb & Zircon Fission Track Dating
Detrital zircon U-Pb geochronology is powerful tool that has expanded rapidly throughout the geosciences with broad applications ranging from studies of modern sediment routing  to the evolution of the early Earth.  In addition to accumulating Pb daughter products, zircon also accumulates damage zones in the crystal lattice, "fission tracks," from the spontaneous fission of 238U.  Measuring U concentrations (parent products) and fission track concentrations (daughter products) allows us to date the time that has elapsed since the zircon started accumulating these tracks, which is generally when the crystal cooled below ~240 degrees C. Work is ongoing to refine methods to efficiently measure  zircon fission track (ZFT) ages and U-Pb ages simultaneously where U concentrations are determined by LA-ICP-MS (along with U-Pb isotope ratios).  The picture at the left is a backscatter electron (BSE) image of a zircon crystal that has been etched in acid to enlarge and reveal the fission tracks.  The small black dots on the surface of the grain (e.g. inside the red box) are where the tracks have intersected the polished surface of the crystal.  ZFT data adds an additional dimension to conventional detrital zircon U-Pb datasets and could potentially become as widely applied. 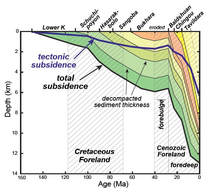 Lithospheric Flexure and Foreland Basin Systems
Foreland basin systems migrate with their flexural load (usually an advancing thrust belt), which results in a classic stratigraphic succession.  Pulses of uplift or renewed  crustal thickening in an orogenic interior can increase the amplitude of the flexural profile (deepen the foredeep, raise the forebulge, etc.), however,  renewed uplift does not initiate a new flexural "wave" that migrates over the existing profile.  This concept is at odds with the stratigraphic record in many basins that contain evidence for multiple (vertically stacked) foreland basin sequences.  For example, the Appalachian Basin records forebulge unconformities and foredeep clastic wedges  associated with the Taconic, Acadian, and Alleghanian orogenies.   Is there a mechanism for the continental lithosphere to elastically reequilibrate between orogenic episodes?  If so, what are the factors that allow foreland successor basins to be built on the graves of previous foreland basins?  I am interested in understanding if the addition of sedimentary wedges to the crustal column affects the long-term strength of the lithosphere.  Perhaps foreland successor basin geometries will allow us to track the strength of the lithosphere through time.

Thermokinematic Modeling in Thrust Belts
Thermokinematic modeling links together thermochronologic data (AHe, AFT, ZHe, ZFT, Ar/Ar) with structural cross-sections and reconstructions.  I have used  FETKIN (Finite Element Temperature and KINematics) in collaboration with Rich Ketcham (UT Austin) to generate synthetic thermochronologic data and then iteratively adjust cross-section reconstructions to find the best fit to the observed data (AHe and AFT in this case) and constrain geometry and kinematics. Combining low-temperature thermochronology and numerical modeling to advance this method and apply it to other thrust belts.